When Jacques St. Pierre, student council prez, was planning an anti-bullying assembly at his arts-academic high school, he decided to try to grab his classmates’ attention in a big way: by getting a celeb to speak out. So when a sweet native New Yorker called Stefani Joanne Angelina Germanotta – known to the masses as Lady Gaga – answered Jacques’ request with a one-minute video message for his school, he was over the moon.

“When I showed it to the student council, they all cheered and screamed and freaked out,” Jacques told a reporter. “She’s talking directly to [students].”

Jacques is a blissed-out fan of the pop singer and admits he watched the video more than 300 times before unveiling it last week in front of the student body.

Jacques also admits he was bullied in a previous school. After his school took a group pledge against bullying during last week’s assembly, Jacques and the student council launched a campaign called The “I Will Make It Better” Project. Presumably, the name of this campaign was inspired by the It Gets Better Movement. But I like this take on it, kicking it up a notch from a passive just-you-wait-until-you-sprout-hairs message to a hands-on, I’m-gonna-kick-some-bully-butt attitude (not literally, of course – this is a campaign for peace, after all).

Canadian comedian and anti-bullying activist Rick Mercer also made a video visit. But it was Lady Gaga’s parting words to the kids that made me teary (I’m often teary on Fridays): “Have a wonderful day at school,” she told the kids, “and love each other, treat each other with kindness, because we’re all we’ve got.”

And then she blew a kiss. Steffie, where did you learn to be so compassionate – or were you, in fact, Born This Way? 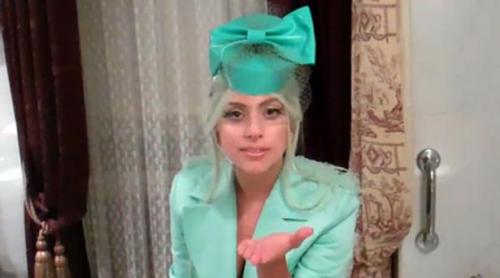 That’s no Poker Face: Gaga does a good deed.