Holiday shopping – urgh. We all have our horror stories. But very often we also have touching stories, and today I’m going to share my friend Leisa’s tale.

It started brutally early on Monday morning. At least it felt early to my pal and her husband Jim, both of whom, for a host of conspiring reasons, are sleep-starved and bleary-eyed these days. The couple had already hit several specialty stores before reaching their local shopping mall. Then there was a brief delay in the parking lot, where they stopped to help push a stranger’s car closer to the set of jumper cables that would revive it. “It was no big deal – our good deed for the day,” Leisa told me.

This particular shopping mall covers 1.6 million square feet, and Leisa and Jim probably ended up treading across every single one of them. Five hours and many, many stores later, the worn-out pair suddenly noticed that one of their shopping bags was missing.

“It was a bag containing $103 worth of clothes for the kids, which was our largest purchase of the day,” said Leisa. “Jim only then realized he’d set it down somewhere. But the question was… where?”

Already physically drained (and perhaps financially too), the couple began the painful process of retracing their steps. In the Christmas section at Zellers they hit gold. A store clerk had stashed the bag safely behind the customer service desk. “What a huge relief,” Leisa said. Sure, they were relieved, but they were also near comatose with exhaustion, and the long lineup at customer service did nothing to pick them up. Happy times again – the same saintly store staffer noticed them waiting and jumped the line to retrieve their shopping bag.

“With our fatigue and then the stress over our almost-loss, I was almost in tears when he brought the bag out to us, and I think he was really touched by that,” Leisa said. The group of three promptly traded heaping amounts of good cheer, each not to be outdone by the others: “We offered ‘Merry Christmases’ back and forth about four times before we left!”

Now it’s my turn to offer you heaping amounts of holiday cheer. Whatever you celebrate, whether it’s Christmas or Festivus or just the fact that you’ve got Three Days Off Workivus, I hope it’s done with good company, good food and something jolly in your glass. All the best! 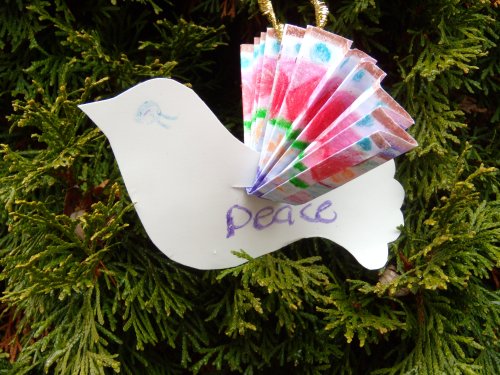 This entry was posted in Guest Stories. Bookmark the permalink.