The Gift of (Fake) Sunshine

I was only half-listening to a trailer for the evening news when the words “indoor beach” leaped out at me. In fact, they practically slapped me across my very pale cheeks. It was only November, and my family was already desperately deprived of hot, bright, peel-your-skin-off summer sunshine.

For my husband Ian, the winters are extra harsh because his wheelchair doesn’t do snow and ice well. During these months it’s rare that he feels more than a few seconds of sun on his face. And as far as sandy beach goes, it’s been rather a while. We took vacations together years ago, but the consequences of aging with a disability mean Ian no longer travels or even drives out of town.

That’s why “indoor beach” caught my attention. What could be more suited to someone who isn’t as mobile as he used to be, yet enjoys solar radiation as much as anyone? I checked out the story online, discovered the beach was recently installed by a Toronto retirement centre called The Briton House and read that it’s only the second place in North America to do so.

What a treat it would be, I thought, for my husband to relax in fake sunshine for an hour, to the sounds of fake surf and seabirds, while lolling in front of a fake beachscape! I endeavoured to find out if there were any plans to offer up beach therapy for public appointments.

Unbeknownst to me, The Briton House was already receiving numerous other e-mails, letters and phone calls from people who wanted their day in the sun. All callers were gently turned down. But when the staff read my note and heard about my husband, they were touched, says family consultant Karen Lantela.

“Although we would only do this on a one-time basis, our team decided we would like to give you the opportunity to give this to your husband as a unique Christmas gift,” she wrote to me. They would charge no money.

That’s how my husband, our daughter and I came to spend an afternoon of our Christmas holidays at the beach. We basked gratefully. See, that’s what you do when someone does you a gracious good turn. You bask. You soak it up. And you drink the free pineapple punch.

Side note: The first day back at school, my kid and her classmates were asked to describe the most noteworthy thing they did on their holidays. My daughter volunteered that she went to an indoor beach. Where? She haltingly mentioned it was at a retirement home: Everyone in the room laughed. Was there water? Well, no, she admitted. More laughter. “But,” she added, “there were wave… um… sounds.” 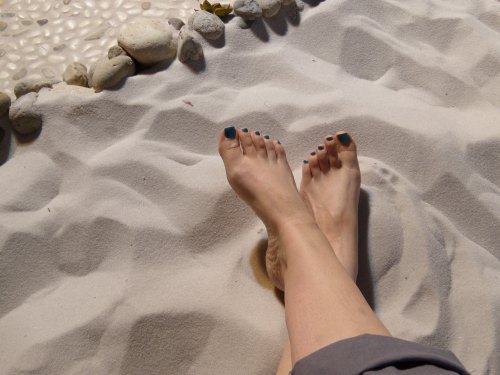 The sand is definitely real.

This entry was posted in Lisa's Story. Bookmark the permalink.

2 responses to “The Gift of (Fake) Sunshine”