Before You Learn to Fly

Sometimes you know you made a difference, but you kind of wish the need hadn’t been there in the first place.

While we were out for an afternoon walk last week, my husband spotted an elderly woman in dire straits across the street. Turns out she’d had a spill on the sidewalk. And now her even-more-elderly husband, plus a passing neighbour we’ll call Helpful Citizen, were together struggling to raise her up and ease her into a lawn chair. It was obvious she was hurt and couldn’t stand. Couldn’t move, in fact, without pain.

I trotted over and asked if an ambulance had been called. “She doesn’t want one,” noted Helpful Citizen. What she wanted, the lady herself explained to me (only half-joking, perhaps?), was a shot or two of whiskey.

I managed to convince the woman that she needed an X-ray, and that she’d be much more comfortable carried by ambulance than struggling to get into the front seat of her husband’s sedan. She relented – but then clammed right up when the 911 operator asked me for her age! Finally the husband piped up: “She’s eighty-five.” As I relayed this to the dispatcher, I heard her mutter: “I should have said twenty-six.” This woman may have been lacking in skeletal stability, but in the wit department there was nothing wrong at all.

Same goes for grace. She appeared chilled, and Helpful Citizen offered to retrieve a blanket from his nearby house. Said the lady: “You’ve done so much already.” (He went after the blanket all the same.)

The woman told us she’d tripped on the unevenness of the sidewalk, a hazard of our aging neighbourhood. “It should be reported,” she proclaimed. As the ambulance arrived, I promised I’d do the reporting. And so I did.

I’ve thought of her every day since the encounter, hoping it was not a hip fracture but a simple bruise, hoping her frail husband isn’t visiting her in a hospital instead of sharing dinner with her at home.

Although the city staffer on the phone assured me the sidewalk would get prompt attention, it hadn’t yet been fixed when I went past the spot on my morning walk yesterday. Hmm, is nagging also considered a good deed? Let’s say yes and go from there. 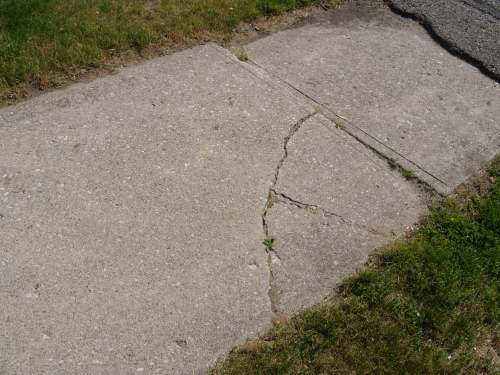 I’ll bet if Prince Charles and Camilla were visiting our street, things would get shipshape in a hurry.

This entry was posted in Lisa's Story. Bookmark the permalink.

6 responses to “Before You Learn to Fly”