A Custodian, a Banana Peel, a Tennis Ball (or Two)

Maybe it’s because my high school reunion is coming up this month (spoiler: I’m not going), but I’ve been thinking a lot about those old public school days. I grew up just outside of a tiny, remote hamlet. When our meager population was finally deemed robust enough to justify the construction of a modest elementary school, I was among the first students.

There are many things about that fresh little K-5 school that stick in my mind. Like the brightly painted foursquare and hopscotch patterns. The shiny, 1970s-modern play structure (poor Marnie E., who fell from it and broke her leg). The proximity to the candy store.

I also remember Mr. Hamilton. He was the small school’s one and only custodian. He was cheerful, skinny and (I thought at the time) incredibly old. He smiled often and wasn’t perturbed by much.

So there I was, a fifth-grade, ostensibly goody-goody sort of student, under the influence and the thumb of my best-friend-at-the-time, Christine M. Christine was smart and creative and bold. In grade five, a person with that special constellation of qualities was considered a troublemaker. (Unbeknownst to me, a teacher had already contacted my parents to suggest they try and break up the friendship.) When, at lunch recess, Christine dared me to throw my banana peel onto the one-storey building’s flat roof, I complied.

I got it in one shot. Unfortunately, I also got caught – by the teacher on yard duty.

She sent me inside to the custodian’s office to apologize forthwith, since he’d be the one stuck cleaning up my roof garbage. I hadn’t thought of that. And truth be told, I had very little experience owning up to my misbehaviour, since I didn’t display much of it in the elementary school setting.

I nervously went down the hall and, trembling, approached the janitor. “Mr. Hamilton?” I said in a tiny voice. “I’m very, very sorry, but I threw a banana peel on the roof.”

Good old Mr. Hamilton (who probably wasn’t all that old). He grinned broadly at me. “Oh, that’s okay,” he said. He reached for his desk. “Do you want a tennis ball? Here, have two tennis balls.” He handed me the treasures and sent me away. Seems Mr. Hamilton didn’t collect only garbage from the school’s flat roof.

I don’t remember much else about that incident. But I remember how relieved I was that the janitor wasn’t mad. And puzzled that he’d rewarded me with a gift.

I’d like to say that it was a major turning point, that Mr. Hamilton set me on the straight and narrow with his simple act of kindness. It would make for a great story. It wouldn’t be true, though. I would have continued to more-or-less behave no matter what. Christine M. and I drifted apart as we got older (she’s all grown up now with three beautiful daughters, which shows what you can do with intelligence and creativity). I got good grades and got into the regular measure of trouble that most teenagers manage to find. No, Mr. Hamilton didn’t do anything earthshattering that day. He was just nice.

But I think it’s enough that I never forgot it. 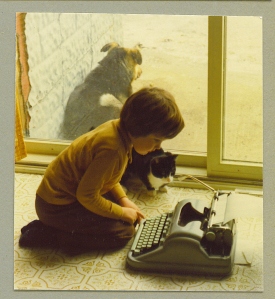 “Hey, something’s wrong – my wi-fi connection is down!”