The Brains of the Mushy

Have you ever wondered why you’re more likely than your neighbour to feed a stray cat, help a little old lady cross the street or weep inconsolably all through the final scenes of Beaches? Stony Brook University has fresh evidence that some people’s brains actually respond more strongly to emotional stimuli.

This brand-new – and I do mean spanking, since it just came out yesterday – paper says that the 20 percent of our population who are classified as “highly sensitive people,” or HSPs (yes, that’s an official scientific term; BLT is not) actually have different brains. When this group of people looked at photos of sad or smiley faces, functional MRIs showed extra blood flow to parts of the brain linked to awareness, empathy and emotion.

Does this mean the other 80 percent of us has lumps of coal for hearts? Definitely not. Virtually all humans are hard-wired for compassion. But a few people are more highly tuned in to the environment around them – and the stuff they see happens to tug at their emotions.

My belief: Anyone can improve their awareness and focus, as long as they work at it. You don’t have to bawl at the movies to prove you’re kind. A dish of tuna at the back door will do just fine. 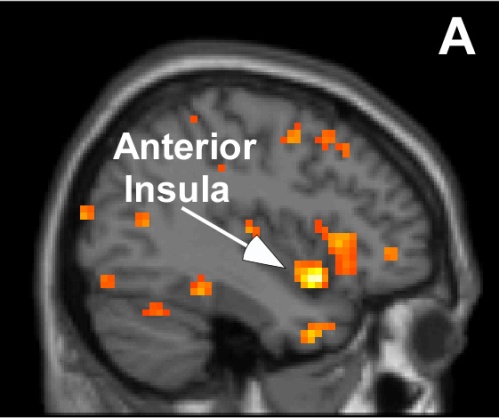 Stony Brook University supplied this photo as proof they know what they’re talking about. Uh, we’ll take their word for it.

Books are full of surprises, aren’t they? Sometimes, it’s not what you’d expect. There was that time I opened a book from my grandmother, four years after she’d died, and found a note along with a delicate pressed rose. Another time, inside a library book, I discovered a handwritten recipe for curried ackees (which I kept, of course. You never know when ackees might go on sale at the local veggie stand).

More recently, I was browsing for bargains in the books section of a secondhand shop. When I flipped through one particular volume, I discovered a small envelope with “To Mark” written on it. Curious, I opened the envelope and pulled out a small notecard. It read: “Dear Mark, we love you very much. It’s such a delight to have us sharing this day together. Oooo mushy. Anyhow, Happy Birthday!” It was signed. And so was an as-yet-uncashed cheque for $60.

Oh, the inhumanity. A gesture of kindness, almost lost forever in an old book. Lost since July 2010, anyway.

Luckily, there was a phone number printed on the cheque. Feeling rather pleased with myself, I pocketed the card and made up my mind that when I got home, I would call the kind couple who loved Mark so dearly. Maybe they could issue him a new cheque, since he never cashed the one they gave him. Maybe they could send the card back to him, or replace it with another, since he took the one they’d lovingly written for him and carelessly stuck it in a…

I chickened out. What if it hurts their feelings, I pondered, to know that Mark misplaced the card, and never bothered to spend the money? Sure, it may have been an honest accident. And maybe he really did turn his house upside down afterwards looking for the gift, before calling his doting friends in anguish, and maybe they have long since replaced the cheque for him.

Yet on the off chance it turned out Mark just didn’t care as much as they did, I didn’t want to take that risk.

Anyhow, I’ve since Googled our friend Mark. He was easy to find. He’s got a respectable job, and he looks happy, if a little scruffy (Mark, if you’re reading this, consider giving that weird beard a trim). So he’s doing okay, really.

I think I’ll let well enough alone. Would you?

P.S. As my replacement good deed (and because I’m sure you’re dying to ask anyway), here’s the recipe for curried ackees:

Sixty bucks: More than enough to pay a barber.

For the record, I’m not a fan of the defacement of public property. But some vandals appear to have a bit more vision than others. There’s no limit to the swear-words, slang and slander that could be scrawled onto a wall or a guardrail. And that’s why I couldn’t help but smile when I saw the letters “L-O-V-E” pasted onto a roadside hazard sign in my neighbourhood (you can relive the moment here). Two years later, I can report that the letters still haven’t been removed.

So when a person with a spray-paint can in hand chooses to write a few words of enlightenment instead of obscenity, you have to admit: It could be a whole lot worse.

Naturally, I captured it on proverbial film for you, dear readers. What do you think… contemptible, or commendable?

Don’t be confused, as I was momentarily, by the inadvertent placement of the shadowy line in the concrete. The sign is NOT telling you to “Drop your Lego.”

Imagine boarding a connecting flight to a destination 5,000 miles away, only to discover that you lost something extremely precious during your last stopover.

No, I’m not talking about a two-year-old child who’s blithely wandered off (although I’m sure that’s happened, too). Rather, it was a very special, engraved wedding ring that somehow slipped off Julie McManus’s finger, somewhere inside Toronto’s international airport.

By the time Julie reached her next layover, which happened to be in Zurich, she had no hope of retracing her steps. And husband Mike was back home in Calgary. But when Julie called him, distraught, Mike told her he’d do what he could while she caught her next plane.

Which meant, basically, plowing through the phone book and calling anything with the word “air” in it, including both the airline itself and airport personnel. But everyone Mike called said the same thing: He only had a hope of getting the ring back if somebody turned it in.

Everyone, that is, except Susie. This particular airport worker, whose surname is unknown and whose exact job title remains mysterious, decided to take a less passive approach. She checked with the airport restaurants, and sent crews of employees to search the public washrooms.

No one found anything. That wasn’t good enough for Susie (whom we’re starting to suspect is maybe a guardian angel, and perhaps not an airport employee after all). She sent more people out to the same washrooms to check all over again.

And it’s a good thing she did, since this time, miraculously, the ring was found – in a garbage can.

“So often, airport staffs are viewed as not that helpful, and they were able to pull that together,” Mike (who apparently still believes Susie is a mere mortal) said in a recent news story. “She went above and beyond the call of duty to make that happen.”