How to Make Your Mark

Mark Henick was a young teen in Nova Scotia when he came within an inch of death.

It was late at night. Mark was depressed and had run out of hope. He was on the wrong side of an overpass railing, barely holding on. Worse, in fact – he was ready to jump.

Then a miracle happened. A man pulled his car over, got out, and began to speak gently. Not to talk Mark out of it. Just to listen.

His name was Mike Richey. This may have nothing to do with anything, or everything to do with everything: Mike had recently started working in youth care. In fact, he was on his way to a shift at a residential centre.

Police and paramedics arrived, bystanders gathered. All kept their distance. But Mike asked Mark if he might move a little closer, just so they could talk more easily. He took a peek over the edge – and felt sick to his stomach as he shared Mark’s view of the asphalt 50 feet below.

And then the boy let go. But just as his body began to topple off the bridge, Mike reached out and gripped him around the chest. Mike and a police officer hauled him away from the edge. An ambulance swiftly took Mark away.

Neither man saw each other again, but neither man ever forgot. It’s been 12 years.

Today, Mark is a professional advocate with the Canadian Mental Health Association in Toronto. Mike works for a province-wide youth crisis centre.

Their brief meeting haunted both of them for years. Mike yearned to know if Mark had found peace, even thrived. Mark constantly wondered about the man who had saved his life.

Both men talked about the life-altering experience to their family and friends. Actually, Mark went one step further than that, sharing it as part of a TED talk about suicide. And then, though social media, he finally expressed his wish to find the man who’d saved his life.

A couple of Mike’s friends recognized the story when they heard it. (Mike admitted later that he cried when he learned that Mark Henick in 2015 is a confident, successful young man, ardently using his personal experience to help others.) And when he found out Mark was ready to hear from him, Mike wrote a very long, heartfelt email. He shared his detailed memories of that pivotal night, and revealed that the experience has never, ever left him. (Mark reads the email for the first time here, in an emotional YouTube video.)

Mike was gratified to know that the young boy he saved had gone on to make a giant-sized difference to others. “I never knew you could feel so proud of someone you spent such a brief moment of time with,” he wrote to Mark.

As for Mark, he felt happy – perhaps closure – after reading the letter, and has now expressed an interest in meeting Mike in person.

And he continues to share his story publicly for those who are struggling. “If this story can help somebody and show them that in fact people do care about them, like this stranger seemed to care about me – a kid on the edge of a bridge – then I hope that makes it worth it.” 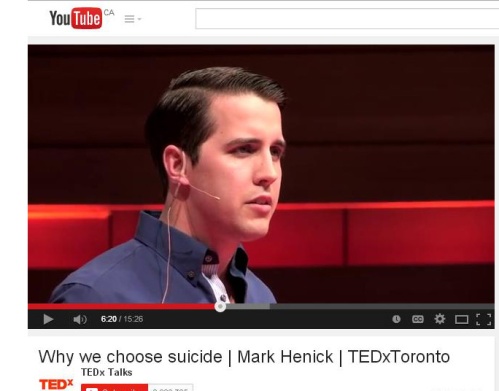 Mark writes on YouTube: “I’ve always modelled myself on the idea that any stranger can save a life.”

5 responses to “How to Make Your Mark”