When our kids get into accidents, it feels as though our hearts have been ripped from our bodies, turned inside out, stuffed full of nails and used in a game of tackle football.

Actually, it feels a lot worse than that.

So you can imagine the agony my Canadian-Dutch friend Ella experienced last month, as she waited for her son to get through emergency brain surgery in Groningen, Netherlands.

Ten-year-old Reuben had been happily playing with his friends when he suddenly fell eight feet from a ladder, receiving a very hard knock to the head and bleeding around his brain. (Doctors said later that had his operation been delayed by just five minutes, he wouldn’t have survived.) It was a horror show – but one with an extremely happy ending. In the days after the surgery, as Reuben was gradually weaned from an array of tubes, bandages and monitors, it became clear that the little boy was recovering.

Naturally his parents were overjoyed and relieved at the outcome. But Reuben wasn’t so happy with his less-than-stylish new look. The left side of his face was bruised and swollen, an entire hemisphere of his head had been shaved, and an enormous incision, laced with dark stitches, curled around his scalp.

After he got home, Reuben opted to have the rest of his head shaved – what choice did he have, really? – but was still distressed over his reflection in the mirror. So, naturally, his mom stepped up. She told her son he could cut off her hair, too. All two-feet-plus of it.

It worked. “When I told him he could shave my hair off, his face lit up completely. One of his first moments of genuine happiness since his accident,” Ella told me. As Reuben operated the electric shaver on his mom’s head, he “was all smiles,” she said. “Afterwards, he sat by me for the longest time, resting his head on my shoulder.”

“I would do anything for my children and people I love,” this devoted mother reported. “Doing this for my son was the ultimate ‘I love you, support you and will do anything for you’ gesture I could think of to show Reuben.”

Ella is no stranger to radical haircuts – she has been growing and donating her hair, over and over, almost her whole adult life – but this was different. “This was the first time in over twenty years of cutting my hair that I didn’t donate it,” she noted. “This was just for my son.”

Today, Reuben is still recuperating. His mom is staying by his side, helping him with jigsaw puzzles, and baking chocolate cookies upon request.

I don’t know whether they’ve spent any of their together time online-shopping for matching scarves or hats (possibly toques, with a nod to Ella’s Canadian heritage) to cover up their buzz cuts. But it doesn’t matter. 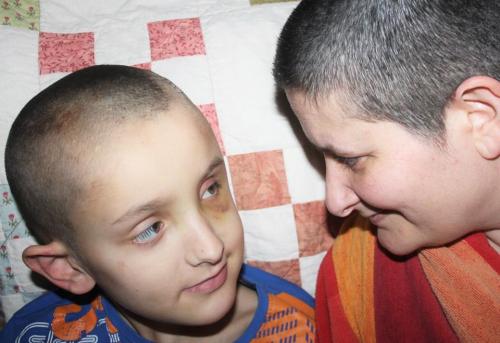