At this moment I can’t think of anything more desperately poignant than a child close to the end of a short, precious life. But a family, along with the extraordinary townspeople of St. George, Ontario, found a special way to create meaning and hope in a dire situation.

Seven-year-old Evan Leversage has brain cancer, and isn’t expected to live another two months. His mom was determined that, no matter what else happened, Evan would not be denied one last Christmas celebration. So she decided the holiday would arrive two months – in her household, at least.

What she couldn’t have predicted were the lengths her community would go to bring her small son some big festive joy. Houses and storefronts throughout the town were decorated with holiday lights and evergreen boughs. Artificial snow was brought in. And this past Saturday, an unforgettable Santa Claus parade with more than two dozen floats made its way down the town’s main street. (Our little star got to ride with Santa in his sleigh.) St. George has a population of just over 3,000. Yet, somehow, more than twice that number showed up. Evan even received holiday greetings and gifts from people in far-flung places, and from celebrities like the Bieber family and Evan’s personal hero, SpongeBob SquarePants.

“To know there’s that many strangers out there that are sending you positive thoughts… is just mind-blowing,” his aunt told CBC News.

Did all these well-wishers manage to make a difference? Evan’s ear-to-ear smile, captured in images shared around the world, should answer that question. But the event meant more than that to Evan’s family, who had hoped to raise awareness of the needs of other children with cancer, not just their son. “The parade was for Evan, but in our family’s heart, we were thinking about all the other children in the same position,” his mom declared the day after the event. Thanks to the efforts of so many caring people, her hope most certainly will come true. 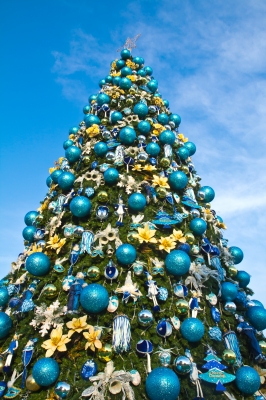 Ordinarily, I’d be fundamentally opposed to posting a Christmas-themed story in October. But one makes exceptions. (Photo courtesy of markuso / FreeDigitalPhotos.net)

This entry was posted in Guest Stories and tagged cancer, Christmas. Bookmark the permalink.