It’s Always Darkest Before the Yawn

She loves me, she loves me not: If you want to know how connected your pal feels to you, try yawning in her presence. The tighter your social bond, the more likely she is to yawn in response to you.

There are a lot of theories about why we yawn, why it’s contagious, and how come some people are more susceptible to infectious yawning than others. It could be genetic. It might be a survival instinct to keep a group out of danger. And it has something to do with age – older people and younger children seem more immune.

Currently, there’s a reasonable amount of evidence to suggest links with empathy. That’s why a group of biologists at the University of Pisa figured that since women are known to have more developed empathic abilities than men (sorry, guys, but it has to do with our traditional roles of tending the kids and making sure our clans get along), perhaps they’d be more susceptible to contagious yawns. They tested this out and found that not only were women, as expected, more likely to catch a yawn than men – but yawns were also more contagious between close friends and family members, and less contagious between people they barely knew.

So if you want to measure the loyalty of your female friend, catch her eye and do some dramatic yawning. (Either that, or ask for a loan, and see how that goes.)

Personally, I’m convinced I have a severe case of yawnitis. I yawn when I see someone else yawning, when I look at a picture of someone yawning, when I write the word yawning, when I think about yawning, even when I watch a drawbridge opening. In fact, I’ve yawned thirty-six times already while writing this blog. Either I’m tight as glue with every person on the planet… or I need another go at the morning coffee. Suspicions are strong it’s the latter. 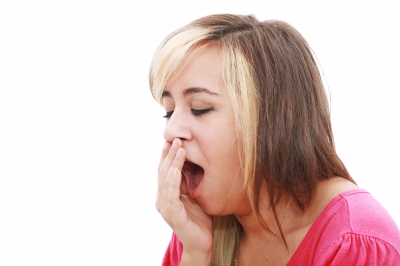 Aw, look at that. She likes you, she really likes you. (Photo by David Castillo Dominici / FreeDigitalPhotos.net)

This entry was posted in Research. Bookmark the permalink.

6 responses to “It’s Always Darkest Before the Yawn”