I’m mellowing out to lovely, folky, Atlantic-inspired electro-acoustic music while I write this. That’s because today’s story is about Joshua Van Tassel, a composer/producer from Nova Scotia whom I’d never heard of before this week. And to get in a proper frame of mind, I’m helping myself to a few sample tunes on his website.

Last Friday, Joshua made the news after setting out to make a music video for one of his songs, called “I Think You’re a Salesman.” Josh travelled around Toronto with his film crew, their equipment… oh, and a grey wool coat pinned with 200 ten-dollar bills for giving away to strangers.

How does this fit “salesman”? I guess Joshua was flogging the concept of good deeds. For a really, really good price. He encouraged everyone he met to take a bill from his coat – and then do something nice for another person. (Of the varied responses that ensued, many will be portrayed in the final video.)

Director Hiep Vu pointed out to The Toronto Star that this good-deed theme is a departure from the “dancing girls and fast cars” in typical music videos. Yeah, I wouldn’t really miss the girls and the cars.

“If there was one thing I’d hope the video could do, it would be to inspire other people to make just a little bit of random kindness every day,” Joshua told me. “It doesn’t have to monetarily focused. Just holding a door for the next person behind you would be great.”

Their experiment worked – sort of. It actually took five hours to get through all 200 giveaways. That’s a little longer than you might expect for free money, especially when a brisk March wind has it flapping tantalizingly. “We had no idea what kind of reactions we’d get, and believe me, I got them all! Happiness, distrust, anger, gratitude,” Joshua says.

But some results were promising. A few folks vowed to give the money to charity, or to people in need. Oddly, others planned to spend the cash on victuals for themselves – hot dogs and beer were both mentioned. One guy outlined a creative compromise that involved a coffee for himself and a kind word for someone else (I hope he wasn’t just referring to a “thank you” for the barista).

Paying people to pay it forward? It’s an innovative idea. And if it pushes a few men and women out of their comfort zones, where they can zone in on someone else’s needs instead, isn’t it worth it?

“If even 10 percent of Toronto’s population thought a little more about the other humans surrounding them throughout the day, I feel like the city vibe as a whole would drastically improve,” Josh says.

Of course, his music helps, too. 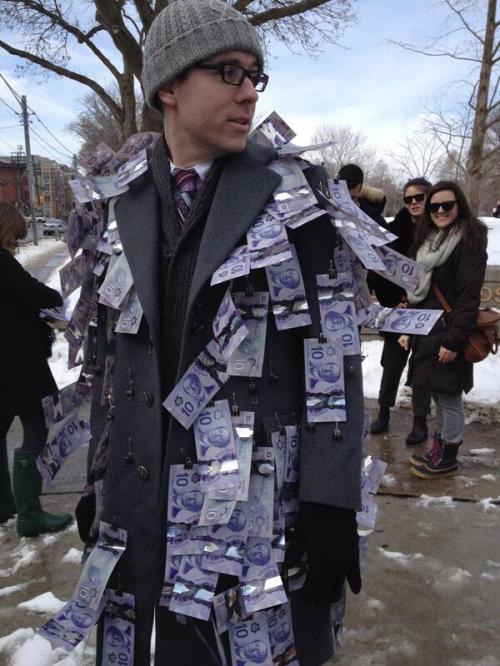 Not just talent and empathy, but also a strong fashion sensibility: Notice how the purple hues of the currency bring out the plum tones in the tie.

This entry was posted in Entertainment, Ideas. Bookmark the permalink.