I’ll Drink to That

Certain organisms only flower in summertime. Like roses, or climbing honeysuckle. And then there’s the lemonade stand – a not-so-rare phenomenon that appears in driveways and on sidewalks during the summer months. This particular entrepreneurial venture is never old. Maybe that’s because of the incredible appeal of the über-cute proprietors – who can say no to a kid?

When you drop a dime (or, more likely these days, a tooney) on a paper cup of that trademark watery, lukewarm, semi-sweet beverage, do you ever wonder where your money goes? I imagine a lot of kids are hoping to splurge on a bike afterwards, or an ice cream cone or two.

But for some children, it’s much bigger. Quinn Callander, a seven-year-old boy in Maple Ridge, British Columbia, used the profits from his lemonade stand in July to raise money for an impressive cause: his friend’s surgery. Quinn’s buddy Brayden has cerebral palsy, and a U.S. operation to help him become more mobile was going to cost his family $20,000. Thanks to Quinn, the price tag is no longer a barrier. By selling lemonade – and crowdfunding online – Quinn pulled in $24,000 for his pal.

In my own neighbourhood, young Julian has organized five lemonade stands over the years (not to mention two hot chocolate stands during less balmy weather), starting from the tender age of five. So far he’s raised $2,419, which he’s donated to charities like Free the Children and the World Wildlife Foundation, as well as towards rebuilding a vandalized playground.

“It’s just a nice thing to do, because it helps other people in the world,” Julian says. “It’s a fabulous feeling knowing you’re helping people.”

And if that isn’t enough of a reason to do it, Julian notes: “Plus the lemonade and Rice Krispie squares taste good.” Nice to know that Julian’s business plan includes regular in-house food inspections. All for a good cause, of course. 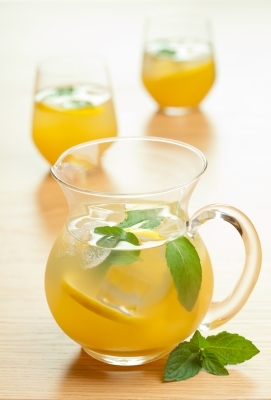 This entry was posted in Ideas. Bookmark the permalink.