We love hearing stories about secret admirers and anonymous gifts. Probably it’s because we know that if someone has chosen to keep their identity secret, it’s pretty clear they aren’t seeking acknowledgement – they just want to enjoy the pure pleasure of doing something nice for someone.

Sheza Hasan certainly seemed to have a good time opening the large present that was left on her doorstep last week. There’s no doubt it was a surprise indeed, given that the repurposed cardboard box once held disposable children’s pull-ups. Yet packed inside were over two dozen carefully hand-sewn cloth dolls. Each doll has her own fabric pattern, her own skin tone – and her own colourful, removable hijab.

That was the point of the gift, according to the accompanying note (stuffed inside a pink envelope with Sheza’s name, a curlicue and a heart). “I noticed that dolls wearing hijabs seem hard to find, so I made 25 simple ones,” the benefactor wrote. She – if indeed she is a she – added that she herself isn’t Muslim. “I’m not sure who to give them to, but I thought you might.”

Sheza, who lives in Milton, Ontario, calls the stealth seamstress a “wonderful soul” for making her feel accepted and welcome, especially since she has been on the receiving end of racist vitriol in the past. “Between being told by [a] stranger to ‘go back to my effing country’… this warmed my heart and reminded me that there are ALWAYS more good people out there than the other kind,” she wrote on social media.

Sheza herself wears hijab, and says she and her sisters never saw dolls that looked like them when they were little girls. “Growing up, we’re seeing images out there in the community, and none of them reflect us,” she told a news reporter. ”The only time we see something in the media, it’s usually negative.”

Thus when Sheza showed the dolls to her kids, she emphasized the kindness and respect behind this stranger’s efforts. Now she plans to distribute the dolls and make sure they’re visible in the community.

“Some gestures touch you deep into your soul. This was one of those for me,” Sheza added. 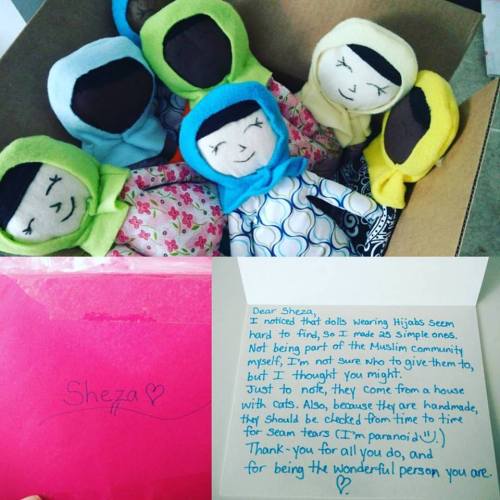 We don’t know what the dolls are stuffed with, but we think it’s some proprietary mixture of warmth, compassion and friendship. (Facebook Photo)

This entry was posted in Ideas, News. Bookmark the permalink.